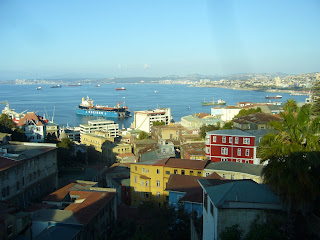 If you ever meet a Chilean abroad and ask them what they miss about home, you always get the same response; misty eyes and 'La cordillera y el Pacifico'.
English people tend to get more and more English when they live overseas. My accent hasn't changed a bit and I even find myself saying phrases I don't remember anyone but my Grandma coming out with. English people are great travellers and as happy as can be when abroad but we never let go of 'England'. The tea and bacon are just too good to forget.
But alongside this wall of Englishness, the local culture can still sneak in unawares. Since moving from Valparaiso, I've found myself yearning for the ocean (and on clear days I had the Pacific and the Andes, sometimes all the way to Aconcagua). Every time I see the Cordillera de los Andes from Santa Cruz and around I feel comforted; 'at least I have the mountains', I say to myself. At the moment, I'm looking for a few hectares to buy for myself and build a house. I've found a few options and I'm drawn to the smallest and most expensive because it has the most magnificent views of the snow-capped mountains. 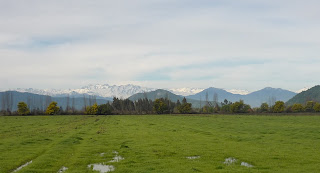 I should also add that despite my English accent being as strong as ever, my actual English is getting worse the longer I live in South America. I found myself saying 'favouritise' and 'it's itching me' the other day, just two of the many mangled Spanglishcisms that seem to come out of my mouth without me even realising what's wrong. Before long, I won't be fluent in my native language which will be rather annoying.
Posted by Matt at 14:44