I really enjoy renovating properties, despite the constant hassle of dealing with maestros and the buying of materials.
Work started a couple of weeks ago in my new house here in Santa Cruz. A new garden wall is almost finished which will provide a bit more privacy than the existing one, all of 1.3m high.
And now the interior is being ripped apart. So far, we've opened up two rooms into one big room, put in skylights in the new studio apartment, new bathroom and above where the kitchen will be. Over the weekend the electricians left the plastic tubing ready to be wired this coming weekend. Finally, the plumber started installing the new everything today.
Now you might be wondering where I find decent maestros. Chilean workers have, shall we say, a reputation. Around here people say, Para ser maestro, primero hay que ser mentiroso. And it's often true, unfortunately. But I've got some decent guys working with me. Some of them are the same people who renovated my house in Valparaiso. I've got the plumber, electricians and carpenter from there. I also managed to find an excellent, local builder who's doing the brick and cement work. He lies- quite frequently, actually- but I know when it's important and when it's not. He's well aware that I am experienced in this renovation game and if he wants to get paid, he has to do the work...
One of the many advantages of being foreign in Chile is that I can say exactly how I want something done and if the person looks shocked or doubtful, I just say, "That's how we do it in England and that's how it needs be to be done." You can get away with so much by repeating that line over and over...
I'm hopeful that we'll be finished by the first week of December. It's by no means certain...there's a fair bit of work to do. We'll see...
The living room looking out to the garden. 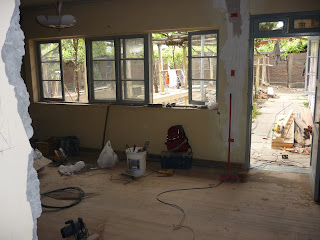 We took this wall out to create one large living/dining room and kitchen. Look- a new skylight. 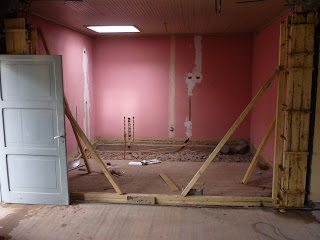 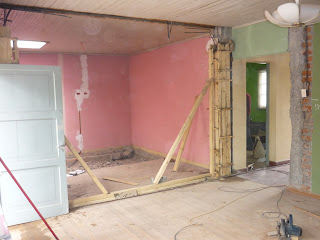 The new garden wall (we kept the gruta but still haven't decided what to put in it). 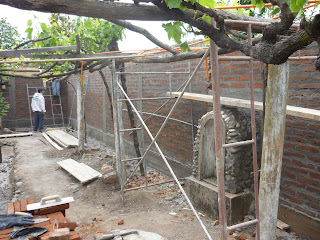 We're turning two rooms into the main suite with a half-wall to divide the bedroom part from what will be a mini-living room. We'll also knock through to create an en-suite bathroom. 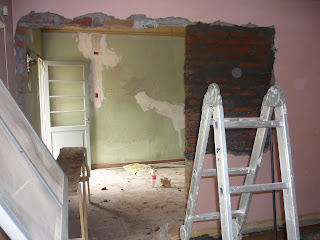 That's all for now. I'll take more photos as things progress.
Posted by Matt at 11:12