Where To Stay and What To Eat In Santa Cruz, Chile 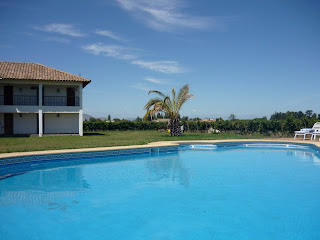 I've posted about where to stay in Santa Cruz before, but since then another hotel more than worth recommending has opened.
Hotel TerraVina, just a minute or two from the Plaza de Armas is run by a Danish-Chilean couple who have done a beautiful job of building from scratch a 20-odd room hotel in traditional Colonial style. Nestled amongst 2 hectares of vines which go to produce Laura Hartwig wines, the hotel is also walking distance to the two best restaurants in Santa Cruz.
First up, is La Casita de Barreales, which is actually the best Peruvian restaurant I've been to in Chile. I went to La Mar in Vitacura a couple of weeks ago and had the same dishes I usually have in La Casita and was not all that impressed- it was really good but not as great as I was expecting...The ceviche at La Casita is incredible and the lomo saltado is pretty good too. The Pisco Sours are amazing. Highly recommended.
And then we come to the newly opened Vino Bello, almost directly opposite La Casita. The restaurant is in a converted barn and stable and the owners, Chilean-American couple Jaime and Janine, did an absolutely amazing job with the renovations, genuinely one of the best jobs I've seen in Chile (there are photos on their website).
And not only is the place really very pretty, but the Italian food is also excellent, with home-made pasta and pizzas being the order of the day. Also highly recommended.
Posted by Matt at 11:42